We were recently shown around the Warren Farm site by Carolyn and Dominique. They are fighting with hundreds of others to prevent Warren Farm, which is one of Ealing’s remaining public Metropolitan Open Land and Community Sports Grounds, from being developed by Queens Park Rangers Football Club, who have been “gifted” a lease of the £31.5 million land for 200 years. 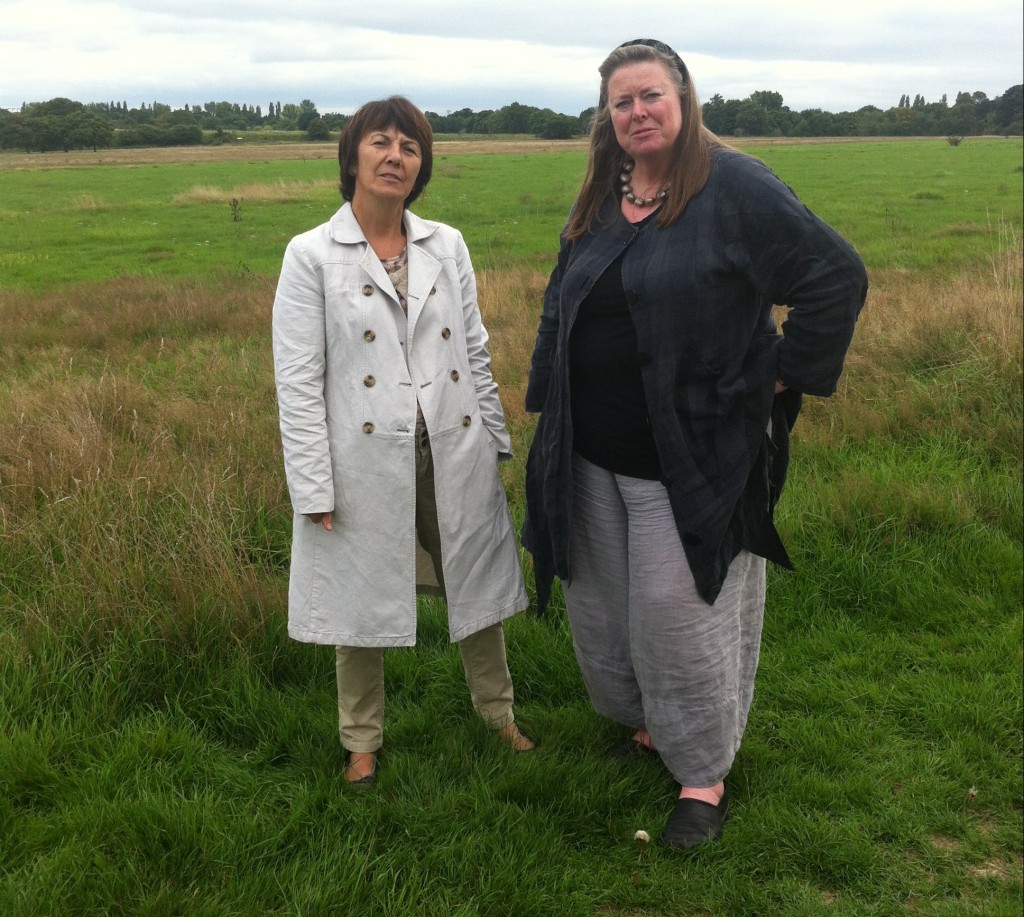 Dominique and Carolyn at Warren Farm

As is stated on the Save Warren Farm website, “Warren Farm comprises 61 acres of land designated in the Council’s own policy as Community Open Space.  Ealing Council has decided, in these straitened times, that it cannot afford to maintain it – although it was only costing a net amount of £37,000 per year when they were maintaining the pitches up until September 2013.  This is peanuts in comparison to the millions they found to invest in restoring Walpole Park in central Ealing, or a multi-storey car park elsewhere it the Borough.    We will be out of this recession, properly, in the next five to ten years (hopefully sooner!).  The Council’s solution to the short term maintenance problem is to lease the land away for 200 years.   The Community’s solution is to raise the £1.5-3M from grants and other sources (still considerably less than the Council’s investment in either the park or the multi-storey car park) to build a new community sports pavilion, maintain the pitches and invest in other community projects on the site to retain all of the land for the Community into the future.”

The battle for Warren Farm has been going on for 3 years and people like Carolyn and Dominique will continue to fight for the good of their community. At The Blind Spot we will endeavour to support this worthwhile cause. For more information about the Save Warren Farm campaign visit their website. There is a wealth of information there, and plenty of ways for you to get involved. 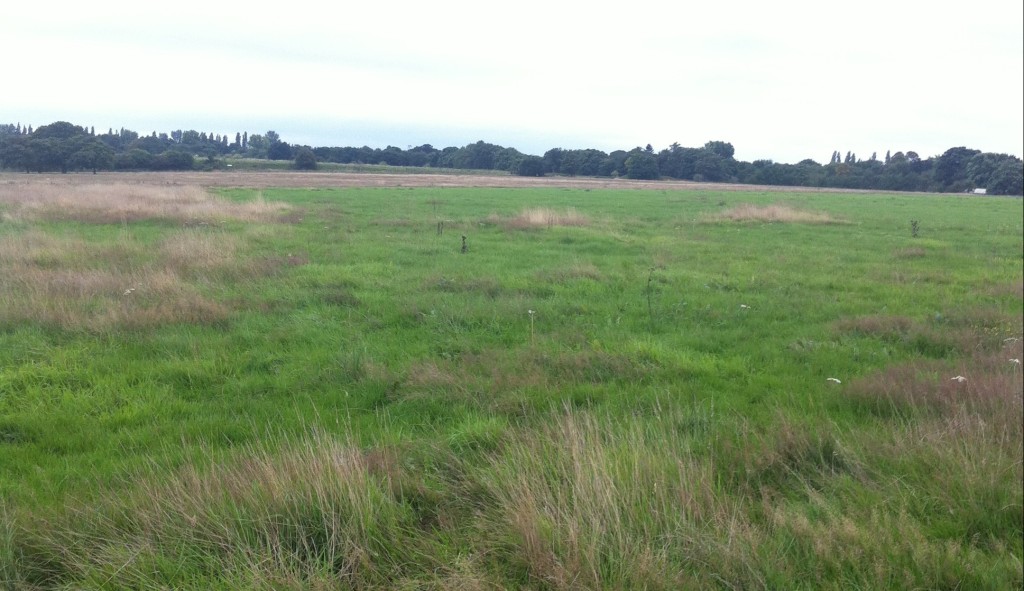 On Wednesday, 16 September 2015 there was an Ealing Council Planning Committee meeting where objections to QPR’s planning application could be aired. Below you can read two very articulate speeches against the proposals. Unfortunately, though not unexpectedly, these objections were dismissed. The fight, however, goes on…

[These plans are significantly different from the first application in terms of design and layout; external appearance and materials; location of, and footprint of, buildings within the site including the relocation of the community changing facilities; loss of sheltering facility adjacent to community pitches; loss of a Site of Importance for Nature Conservation; impact on the environment in terms of a landfill operation to level the pitches; impact on vulnerable people in local hospitals and hospices with respect to air quality, and access for the disabled.]

The over-riding issue remains that the community will be losing 40 acres of publicly-owned community sports fields, Metropolitan Open Land, designated in Ealing’s own Planning Policy as Community Open Space, and in an Archaeological Interest Area. The established pedestrian access at the five bar gate was shown in the original brief to tender. The public footpaths across the site date back generations along cultivation boundaries.

Nowhere else has the capacity to host large sports tournaments such as the APNA Primary Schools Football Tournament held here annually until June 2013. 16 Primary Schools from Southall, Northolt, Ealing, Acton and Hanwell fielded 34 teams. And the Tamil School Sports Association’s Tri-Sports Tournament of Football, Cricket and Netball. We have seen no evidence of how the proposed community programme would be developed.

MOL should NOT be developed, says Paragraph 88 of the NPPF, unless Very Special Circumstances are proved:

1. YES, the site needs development. NO, this is NOT the right proposal for the site as the community would lose 40 acres of public land used as community space

2. Lack of brownfield site is QPR’s problem not Council Tax payers’ in Ealing

3. All these community benefits cited could be achieved in partnership with other organisations without losing 40 acres of public land – the Council has ignored this.

On balance we conclude that ‘very special circumstances’ are not proved.

The Site of Importance for Nature Conservation would be deleted in these plans. This strip along Windmill Lane was never ploughed and has been protected. It has a diverse flora and associated fauna including at least two pairs of successfully breeding Little Owls. The proposed cycle path and access road would remove this completely.

With respect to design and layout, the new proposals differ greatly from the approved plans in location of footprint; the inclusion of a new building linking the Academy and multifunctional operational buildings; the reduction of community trust space previously linked to the Indoor Hall; and relocation of the community pavilion to be attached to the indoor hall. There are no longer basic facilities adjacent to the community pitches. These are not minor changes and the application should NOT be treated as tweaks to the first plans.

The design and external appearance are not appropriate for MOL, but would perhaps be fit for Heathrow Airport. Whilst much will be made of the green roofs, this would only be evident from the sky. Any view of the development from ground level would show massive, overpowering, flat-sided, high buildings.

No design effort has been made to sink the indoor hall into the ground to reduce its height and impact whilst maintaining the requisite FA internal heights. No effort to merge the buildings into the MOL.

There are currently 1,417 signatures online and on paper opposing this application. Over 240 objectors bothered to put pen to paper. Case officer says this is ‘counterbalanced’ by 40 supporters. Astonishing. Given the scale of the scheme, the potential environmental impact is enormous both in terms of air quality, impact on the landscape, despoiling of views, water pollution, destruction of natural habitat an changing of character of the land. This scheme goes against all the principles of sustainability, environmental protection and protection of public space. We strongly object. Please turn it down.”

“Thank you for the time you have given me to speak against this planning application. In the three minutes available I obviously won’t be able to make a point-by-point rebuttal of the 1600 pages that make up this highly controversial planning application. However, I do wish to appeal to you at this late hour to vote in a way which will benefit the community in the long term and that is by rejecting the plan to give away Warren Farm and please voting against this planning application. On a parochial planning level, the work will leave some residents of Wolsey Close with nearly a one-mile round-trip to park their cars, as the only alternative to the turning circle at the entrance to Warren Farm is parking next to the new QPR training ground. It’s not as if we have the choice of taking the bus, as there are no bus services along Windmill Lane. Neither will the 700 privately invited guests to QPR’s regular show matches have any alternative but to bring their cars. The traffic consequences on Windmill Lane are unimaginable. Add to that daily 300 trips by lorries carrying hundreds of tons of landfill that will rumble along Windmill Lane for 10 hours a day, five days a week for eight months. An accident waiting to happen on a busy little road – almost certainly. And those journeys will literally rock our humble homes to their foundations. Please don’t forget about the pollution consequences of that level of traffic on the hospitals all around the site. The upshot of all this will be a five metre high wall of mud and rubbish intruding into the view from what is a Conservation Area. One more thing Warren Farm is Ealing’s biggest public sports ground. Previously used for sport by schools across the borough, we’re now in more need of that space than ever as schools in Ealing lose their playing fields to new classrooms and new schools are built to cope with a rising school population. Warren Farm is an extraordinary asset, which will be lost to the community for 200 years. William Turner’s famous picture of a Windmill from 200 years ago on a site next to Warren Farm put that’s time period into sharp relief. Britain lost Turner’s picture to a private buyer. Let’s not now also lose to a private business the land that was Turner’s inspiration. Ladies and Gentlemen. Thank you for your time.”